A random segment of a speech signal: 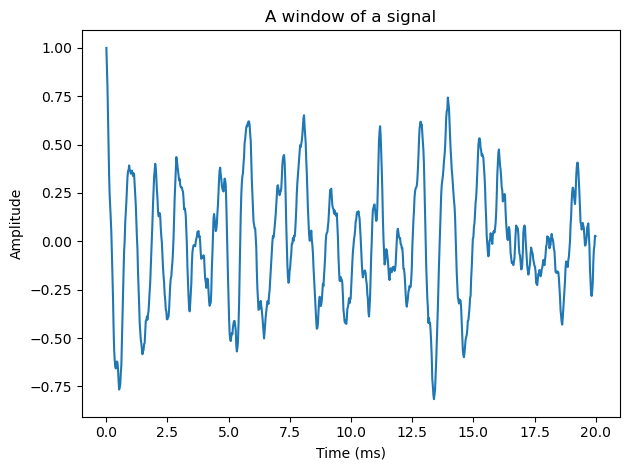 Look at the above segment of speech. What structures can you identify?

This is a linear predictor because it takes a linearly weighted sum of past components to predict the current one.

where \(a_{0}=1\). This explains why the definition of \(\hat x_n\) included a minus sign; when we calculate the residual, the double negative disappears and we can collate everything into a single summation.

Using vector notation, we can make the expressions more compact

Here we calculated the residual for a length \(N\) frame of the signal.

The above definition of \(X\) is used in the covariance method for parameter estimation. A slight modification is to assume the input signal is windowed such that it is non-zero only for \(x_0\dots x_{N-M}\) such that \(x_k=0\) for \(k<0\) and \(k>N-M\). It follows that \(X\) becomes a convolution matrix

The benefit of this structure is that then \(X^T X\) is a Toeplitz matrix, which gives many beneficial properties in the autocovariance method below.

where \( R_x = E\left[X^T X\right] \) and \( E\left[\cdot\right] \) is the expectation operator. Note that, as shown in the autocorrelation section, the matrix \(R_{x}\), can be usually assumed to have a symmetric Toeplitz structure.

If we would directly minimize the mean-square error \( E\left[\|e\|^2\right], \) then clearly we would obtain the trivial solution \(a=0\), which is not particularly useful. However that solution contradicts with the requirement that the first coefficient is unity, \(a_{0}=1\). In vector notation we can equivalently write

The standard method for quadratic minimization with constraints is to use a Langrange multiplier, \(\lambda\), such that the objective function is

This function can be heuristically interpreted such that \(\lambda\) is an arbitrary, free parameter. Since our objective is to minimize \( a^T R_x a \), then if \(a^T u - 1 \) is non-zero, then the objective function can become arbitrarily large. To allow any value for \(\lambda\), the constraint \(a^T u - 1\) must therefore be zero.

An alternative to the autocovariance method is to use the full signal \(x_n\) without windowing, that is, without the assumption that the signal is zero outside a particular range. Then the elements of matrix \(X\) at position \(k,h\) can be compactly represented by \(X_{k,h}=x_{k-h}\). We can then continue to use the minimum squared error (MSE) approach to determine the coefficients \(a\), but then the covariance \(C_x=X^T X\) does not have Toeplitz structure anymore. To emphasise this distinction, we talk here about the covariance \(C_x=X^T X\), whereas the autocovariance is the expectation \(R_x=E[X^T X]\).

We do not anymore have guarantees that \(C_x\) is full rank and therefore \(a\) cannot be solved by inversion of \(C_x\). Instead, we have to use a pseudo-inverse signified by \(^\dagger\) as

Observe that the normal equations can be written as

The scalar \(\lambda\) is present only in the first equation, such that we can split the equations as

Reorganizing the terms finally gives us the Yule-Walker equations as

Observe that the Yule-Walker equations are analytically equivalent with the normal equations and this rewrite is thus only for convenience. We now have \(M\) unknowns in \(M\) equations. However, since this equation is still best solved by the Levinson-Durbin iteration, which internally uses a version of the normal equations, and requires an extra post-processing step to support other equations, the differences in computational complexity are negligible.

Linear prediction is usually used to predict the current sample of a time-domain signal \(x_{n}\). The usefulness of linear prediction however becomes evident by studying its Fourier spectrum (Z-transform). Specifically, since the error is a convolution of the input and the filter, \(e_n = x_n*a_n\), the corresponding Z-domain representation is

In other words, the inverse spectrum of the linear predictor \(A^{-1}(z)\) thus models the macro-shape or envelope of the spectrum. 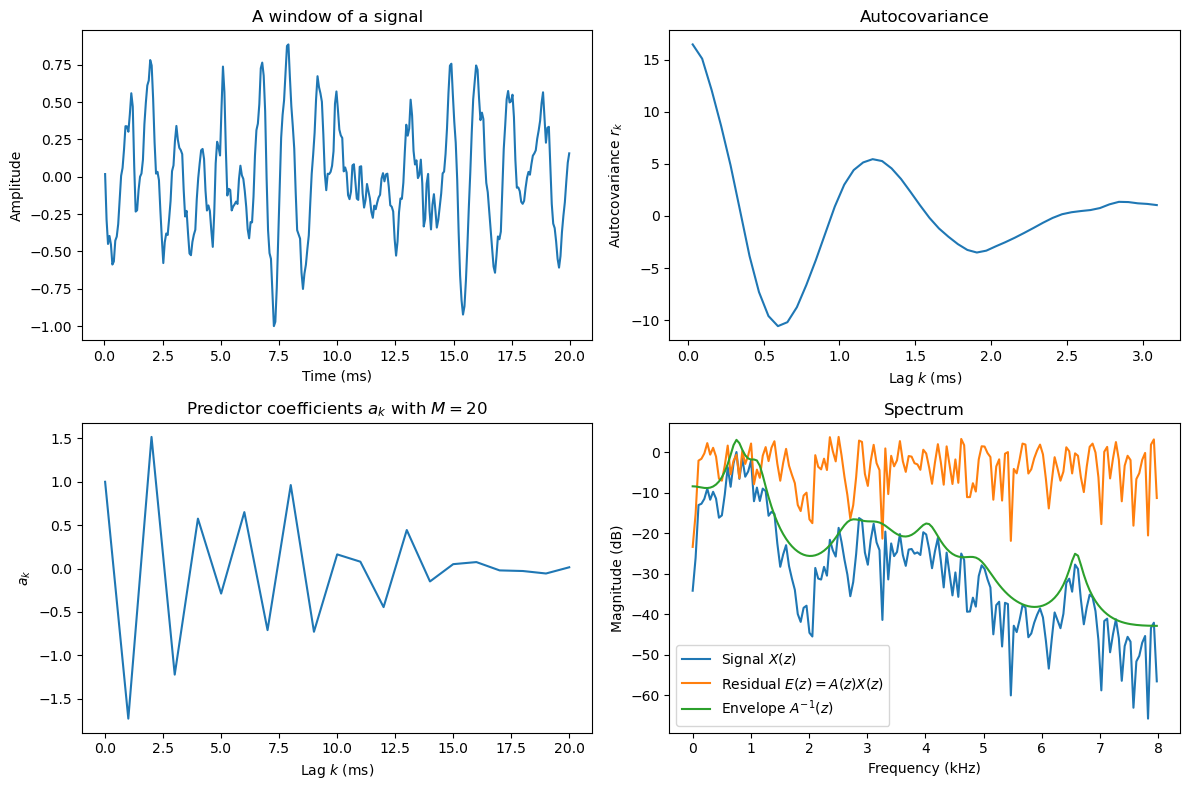 Above, we calculate the autocovariance of a random segment of a speech signal. We then calculate the corresponding predictor coefficients \(a_k\) with some model order \(M\). The parameter coefficients are an abstract representation of the signal and it is generally hard to find any heuristic interpretation of the coefficients. The final panel illustrates the spectra of the signal and its envelope. We can see that the envelope follows closely the peaks of the signal. Here the envelope has been moved vertically to align approximately with the peaks, so the important observation is that the shape of the envelope follows the shape of the peaks. The absolute value (overall elevation) of the envelope is not here meaningful. Finally, we can observe that the spectrum of the residual \(e_n=a_n*x_n\) is approximately flat, that is, \(e_n\) is approximately white noise (statistically uncorrelated noise).

where \(f_{s}\) is the sampling frequency and \(c\) is the speed of sound. With an air-temperature of 35 C (approximate temperature of air flowing out from the mouth), the speed of sound is \(c\)=350m/s. The mean length of vocal tracts for females and males are approximately 14.1 and 16.9 cm. We can then choose to overestimate \(L\)=0.17m. At a sampling frequency of 16kHz, this gives \( M\approx 17 \) . The linear predictor will catch also features of the glottal oscillation and lip radiation, such that a useful approximation is \( M\approx{\text{round}}\left(1.25\frac{f_s}{1000}\right) \) . For different sampling rates we then get the number of parameters \(M\) as

Observe however that even if a tube-model is equivalent with a linear predictor, the relationship is non-linear and highly sensitive to small errors. Moreover, when estimating linear predictive models from speech, in addition to features of the vocal tract, we will also capture features of glottal oscillation and lip-radiation It is therefore very difficult to estimate meaningful tube-model parameters from speech. A related sub-field of speech analysis is glottal inverse filtering, which attempts to estimate the glottal source from the acoustic signal. A necessary step in such inverse filtering is to estimate the acoustic effect of the vocal tract, that is, it is necessary to estimate the tube model. 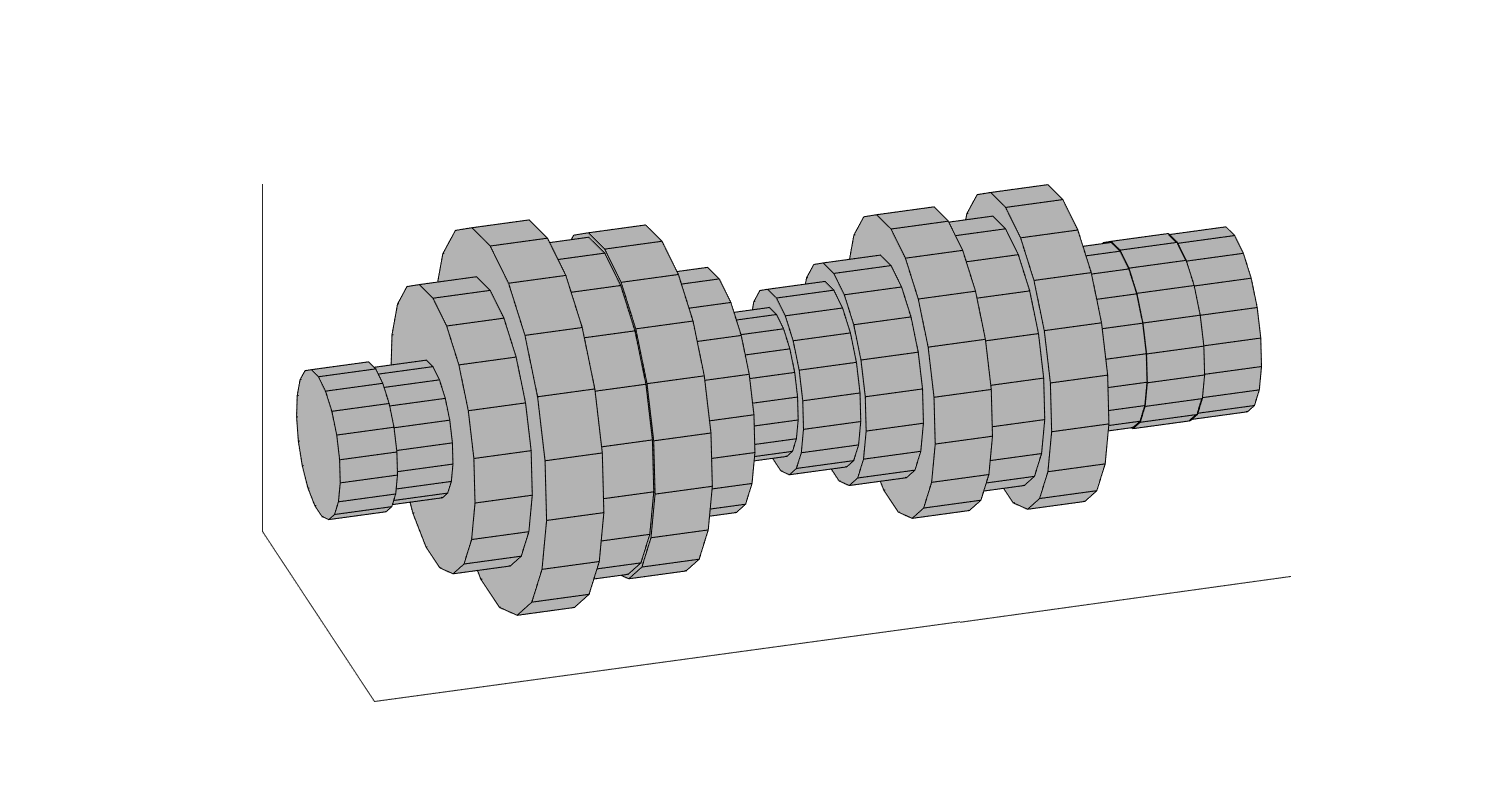 Suppose scalars \(a_{m,k}\), are the coefficients of an \(M\)th order linear predictor. Coefficients of consecutive orders \(M\) and \(M+1\) are then related as

Furthermore, the logarithmic ratio of cross-sectional areas, also known as the log-area ratios, are defined as

This form has been used in coding of linear predictive models, but is today mostly of historical interest.