A frequently occurring distortion in speech telecommunication scenarios is echoes, which have either an electric or acoustic cause. Electric echoes appear in analogue networks at points of impedance mismatch. Since a majority of telecommunication networks today are digital, such electric echoes are mostly of historical interest and not discussed here further. Acoustic echoes however is a problem which has become more  important, especially with the increasing use of teleconferencing services. Such acoustic echoes appear when the speech of a person A is played through the loudspeakers for a person B, such that the loudspeaker sound is picked up by the microphone of person B and transmitted back to person A. If the delay would be mere milliseconds, then person A would perceive the feedback signal as reverberation, which is not too disturbing (in some circumstances such an effect, known as side-talk, could actually be a useful feature indicating that the microphone is recording). However, typically the transmission delay is above 100ms, such that the feedback is perceived as an echo, which is usually highly disconcerting and disturbing. Even worse, sometimes the acoustic echo signal completes the feedback loop and goes in a circle, again and again. If the feedback signal is attenuated on each loop, then the feedback slowly diminishes, but sometimes the feedback loop can amplify the signal such that the signal quickly escalates up to the physical limit of hardware or until the loudspeakers blow up. It is thus clear that echoes must be avoided in real-life systems.

Fortunately, echo cancellation is well-understood problem with “standard” solutions available. In short, these methods are based on estimating the acoustic room-impulse-response (RIR), filtering the loudspeaker signal with the RIR to obtain an estimate of the acoustic echo, and subtracting the estimated echo from the microphone signal. Though it is a classic problem with off-the-shelf solutions available, it remains a difficult problem. Central difficulties include:

Echo suppression methods use this insight to remove acoustic echo with a multiplicative method similar to that of spectral subtraction or Wiener filtering used in noise attenuation.

As it is mentioned above, the problem that echo cancellation needs to solve is the effect of the room in the path from a loudspeaker to the microphone used in the communication. This means that the signal played by the loudspeaker enters the system with a certain delay and multiple echo paths (Room impulse response). From now on, we will refer to the received signal played by the loudspeaker as far-end (x(n)), and the useful speech signal from the user will be called near-end signal (s(n)). The mixture recorded by the microphone that would be sent to the other end of the call can be represented as:

where v(n) represents additive noise in the scene and, for simplicity, will be considered part of s(n). The effect of the room on the far-end signal can be modelled as an FIR filter h(n), added to the far-end signal using a convolution. The idea of echo cancellation is to find an estimation of this FIR filter, and applying it to the received far-end signal, we can then subtract it from d(n) to extract the useful near-end signal.

The estimation of the echo path model is done by minimizing the mean square error (MMSE) between the recorded signal and the estimated filtered far-end, assuming that s(n) is not present. However, only one estimation is not possible due to multiple factors.

These three issues require a continuous monitoring of the quality of the estimation and the filter must be periodically updated in order to accurately represent the echo path. For that reason the MMSE method must be calculated iteratively as we receive more information from the far-end and recorded signals. The most popular algorithm to calculate this adaptive filter is Least Mean Squares (LMS) and its multiple variants. The expression to minimise is:

The objective is to find the coefficients of the estimated filter that minimise the previous equation, and a simple depiction of the iterative LMS algorithm used to update the filter can be divided in three steps:

The term μ represents the learning rate of the algorithm. Higher values will make the algorithm converge faster, but might converge to a bigger error value, while smaller learning rate will converge slower and it might not be able to follow the changes in the echo path. It has been proven that an adaptive learning rate provides the best results and most modifications on this method, focus on handling an adaptive learning rate according to the required specifications. As we can see in the second equation, the estimation error of the adaptation algorithm is also the signal that will be used as output and that will contain the corresponding s(n) in an optimal case.

This first approach of the LMS adaptive filter is proposed to be applied on the time domain of the audio signal. If the filter updates on every sample of the received audio signal, accurately modelling a room impulse response will require a filter of a few thousand samples. Updating the filter on every new sample becomes computationally expensive, and for these reasons other methods are proposed based on this approach:

Finally, as we mention above, the main problem that adaptive filters face in real-life communication applicatoins is double talk. In a common interaction between two people, it is very likely that both speakers are active at the same time. In the echo cancellation framework, that means that both far-end signal x(n) and near-end s(n) will be present in the mixture. As the adaptive filter tries to minimize the error between the far-end signal and the recorded one, in the presence of double-talk the filter will likely diverge and remove or distort the near-end signal instead of reducing the echo feedback.

To reduce the effect of double-talk in the adaptation process, it is important to detect when double-talk starts and stop the adaptation. Assuming that the filter had converged before the double-talk segment, the the far-end signal should still be removed, while the near-end speaker would pass through. Many methods have been presented to control the learning rate of the adaptative filter depending on the detected double-talk, but most of them are based on three main ideas:

Model of the echo path and estimated filter 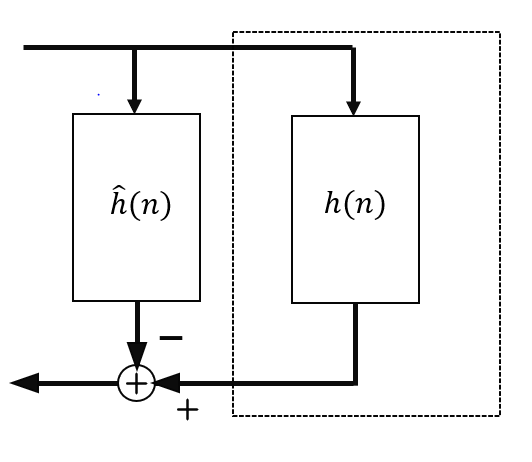 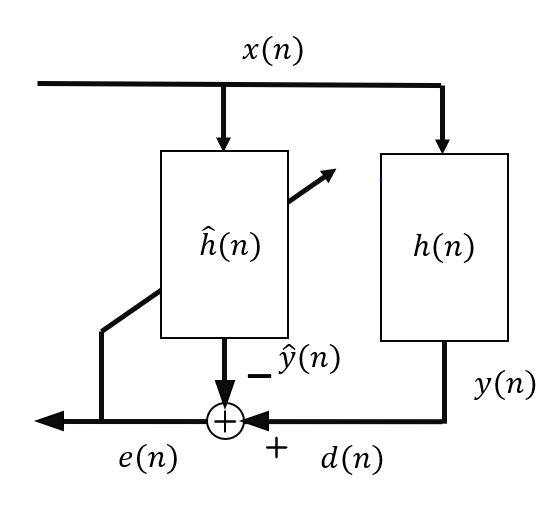 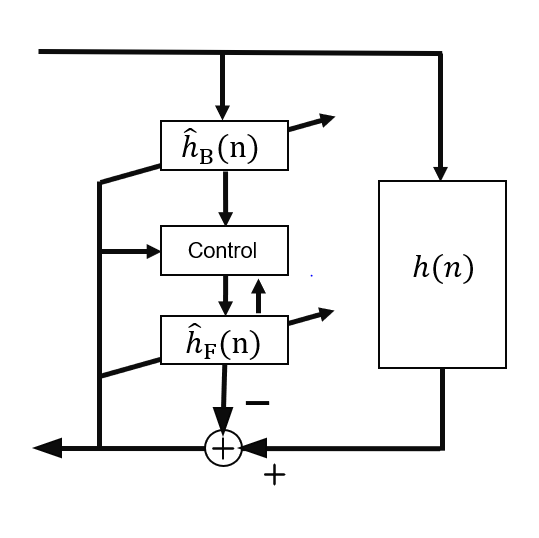