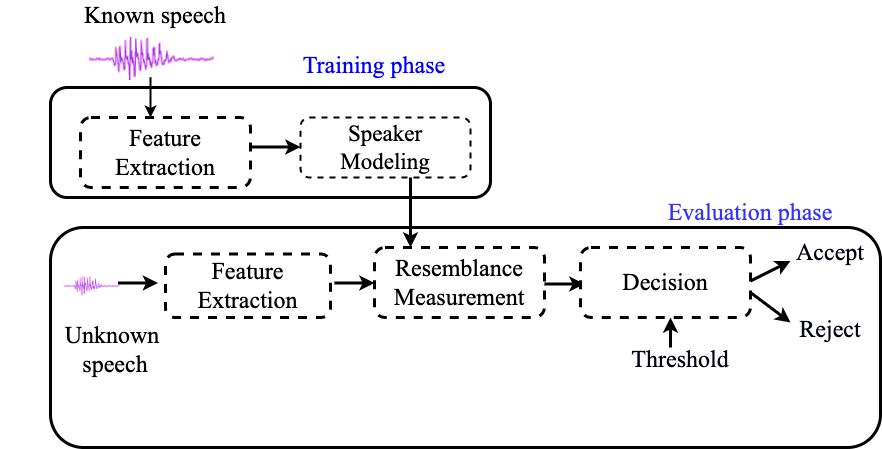 As it is shown in the above block diagram of a basic speaker verification system, a speaker verification system involves two main phases: the training phase in which the target speakers are enrolled and the testing phase in which a decision about the identity of the speaker is taken. From a training point of view, speaker models can be classified into generative and discriminative. Generative models such as Gaussian Mixture Model (GMM) estimate the feature distribution within each speaker. Discriminative models such as Support Vector Machine and Deep Neural Network (DNN), in contrast, model the boundary between speakers.

Many front-end processing are often used to process the speech signals and to extract the features which are used in the speaker verification system. The front-end processing consists of mainly voice activity detection (VAD), feature extraction and channel compensation techniques;

A Gaussian Mixture Model (GMM) is a parametric probability density function represented as a weighted sum of Gaussian component densities. GMMs have been successfully used to model the speech features in different speech processing applications. A Gaussian mixture model is a weighted sum of M component Gaussian densities. Each of the components is a multi-variant Gaussian function. A GMM is represented by mean vectors, covariance matrices and mixture weights.

In speaker recognition, a speaker can be modeled by a GMM from training data or using Maximum A Posteriori (MAP) adaptation. While the speaker model is built using the training utterances of a specific speaker in the GMM training, the model is also usually adapted from a large number of speakers called Universal Background Model in MAP adaptation.

Given a set of training vectors and a GMM configuration, there are several techniques available for estimating the parameters of a GMM . The most popular and used method is the maximum likelihood (ML) estimation.

The ML estimation finds the model parameters that maximize the likelihood of the GMM given a set of data. Assuming an independence between the training vectors \( X = \{x_i,\dots,x_N\} \) , the GMM likelihood is typically described as:

The parameters of a GMM can also be estimated using Maximum A Posteriori (MAP) estimation, in addition to the EM algorithm. The MAP estimation technique derives a speaker model by adapting from a universal background model (UBM). The “Expectation” step of EM and MAP are the same. MAP adapts the new sufficient statistics by combining them with old statistics from the prior mixture parameters.

Then, the sufficient statistics for the weight, mean and variance parameters is computed as follows:

The adaptation coefficients controlling the balance between old and new estimates are  \( \{\alpha^w_i, \alpha^m_i, \alpha^v_i\} \) for the weights, means and variances, respectively. The scale factor, \( \gamma \) , is computed over all adapted mixture weights to ensure they sum to unity.

Different approaches have been developed recently to improve the performance of speaker recognition systems. The most popular ones were based on GMM-UBM. The Joint Factor Analysis (JFA) is then built on the success of the GMM-UBM approach. JFA modeling defines two distinct spaces: the speaker space defined by the eigenvoice matrix and the channel space represented by the eigen-channel matrix. The channel factors estimated using JFA, which are supposed to model only channel effects, also contain information about speakers. A new speaker verification system has been proposed using factor analysis as a feature extractor that defines only a single space, instead of two separate spaces. In this new space, a given speech recording is represented by a new vector, called total factors as it contains the speaker and channel variabilities simultaneously. Speaker recognition based on the i-vector framework is currently the state-of-the-art in the field.

Given an utterance, the speaker and channel dependent GMM supervector is defined as follows:

where  \( m_c \) is the mean of UBM mixture component \( c \) . The i-vector for a given utterance can be obtained using the following equation: 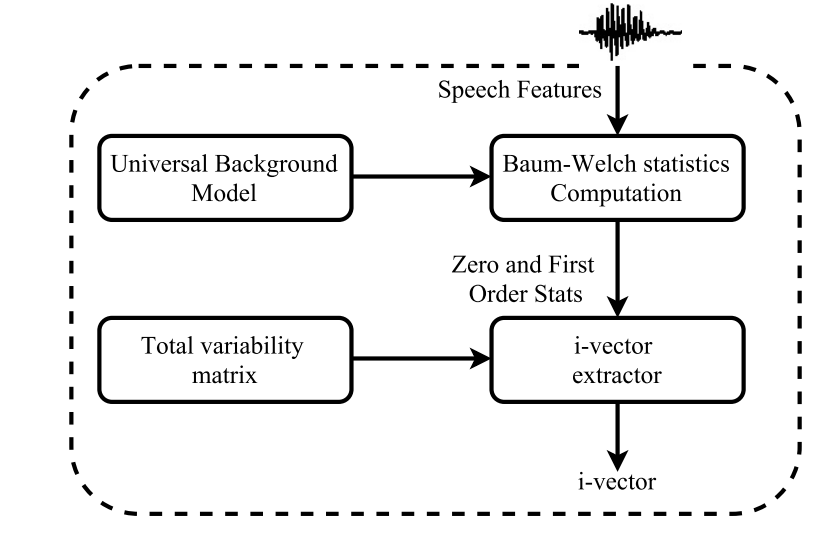 The cosine distance scoring considers only the angle between two i-vectors, not their magnitude. Since the non-speaker information such as session and channel variabilities affect the i-vector magnitude, removing the magnitudes can increase the robustness of i-vector systems.

The i-vector representation followed by probabilistic linear discriminant analysis (PLDA) modeling technique is the state-of-the-art in speaker verification systems. PLDA has been successfully applied in speaker recognition experiments. It is also applied to handle speaker and session variability in speaker verification task. It has also been successfully applied in speaker clustering since it can separate speaker and noise specific parts of an audio signal which is essential for speaker diarization.

In PLDA, assuming that the training data consists of \(J\) i-vectors where each of these i-vectors belong to speaker \(I\), the \(j\)’th i-vector of the \(I\)th speaker is denoted by:

where  \( \mu \)  is the overall speaker and segment independent mean of the i-vectors in the training dataset, columns of the matrix F define the between-speaker variability and columns of the matrix G define the basis for the within-speaker variability subspace.  \( \Sigma_{ij} \) represents any unexplained data variation. The components of the vector  \( h_i \) are the eigenvoice factor loadings and components of the vector  \( y_{ij} \) are the eigen-channel factor loadings. The term  \( Fh_i \) depends only on the identity of the speaker, not on the particular segment.

Although the PLDA model assumes Gaussian behavior, there is empirical evidence that channel and speaker effects result in i-vectors that are non-Gaussian.  It is reported in that the use of Student’s t-distribution, on the assumed Gaussian PLDA model, improves the performance. Since this normalization technique is complicated, a non-linear transformation of i-vectors called radial Gaussianization has been proposed. It whitens the i-vectors and performs length normalization. This restores the Gaussian assumptions of the PLDA model.

A variant of PLDA model called Gaussian PLDA (GPLDA) is shown to provide better results.  Because of its low computational requirements, and its performance, it is the most widely used PLDA modeling. In GPLDA model, the within-speaker variability is modeled by a full covariance residual term  which allows us to omit the channel subspace. The generative PLDA model for the i-vector is  represented by

The residual term  \( \Sigma \) representing the within-speaker variability is assumed to have a normal distribution with full covariance matrix \( \Sigma \) .

Deep Learning Frontends: The traditional i-vector approach consists of mainly three stages: Baum-Welch statistics collection, i-vector extraction, and PLDA backend. Recently, it is shown that if the Baum-Welch statistics are computed with respect to a DNN rather than a GMM or if bottleneck features are used in addition to conventional spectral features, a substantial improvement can be achieved. Another possible use of DL in the frontend is to represent the speaker characteristics of a speech signal with a single low dimensional vector using a DL architecture, rather than the traditional i-vector algorithm. These vectors are often referred to as speaker embeddings. Typically, the inputs of the neural network are a sequence of feature vectors and the outputs are speaker classes.

Deep Learning Backends: One of the most effective backend techniques for i-vectors is PLDA which performs the scoring along with the session variability compensation. Usually, a large number of different speakers with several speech samples each are necessary for PLDA to work efficiently. Access to the speaker labeled data is costly and in some cases almost impossible. Moreover, the amount of the performance gain, in terms of accuracy, for short utterances is not as much as that for long utterances. These facts motivated the research community to look for DL based alternative backends. Several techniques have been proposed. Most of these approaches use the speaker labels of the background data for training, as in PLDA, and mostly with no significant gain compared to PLDA.

Deep Learning End-to-Ends: It is also interesting to train an end-to-end recognition system capable of doing multiple stages of signal processing with a unified DL architecture. The neural network will be responsible for the whole process from the feature extraction to the final similarity scores. However, working directly on the audio signals in the time domain is still computationally too expensive and, therefore, the current end-to-end DL systems take mainly the handcrafted feature vectors, e.g., MFCCs, as inputs. Recently, there have been several attempts to build an end-to-end speaker recognition system using DL though most of them focus on text-dependent speaker recognition.

False acceptance: A false acceptance occurs when the speech segments from an imposter speaker are falsely accepted as a target speaker by the system.

The performance metrics of speaker verification systems can be measured using the equal error rate (EER) and minimum decision cost function (mDCF). These measures represent different performance characteristics of system though the accuracy of the measurements is based on the number of trials evaluated in order to robustly compute the relevant statistics. Speaker verification performance can also be represented graphically by using the detection error trade-off (DET) plot. The EER is obtained when the false acceptance rate and false rejection rate have the same value. The performance of the system improves if the value of ERR is lower because the sum of total error of the false acceptance and false rejection at the point of ERR decreases. The decision cost function (DCF) is defined by assigning a cost of each error and taking into account the prior probability of target and impostor trails. The decision cost function is defined as:

where  \( P_{miss} \) and  \( P_{fa} \) are the miss and false alarm rates recorded from the trials, and the other parameters are adjusted to suit the evaluation of application-specific requirements.