An ASR system produces the most likely word sequence given an incoming speech signal.  The statistical approach for speech recognition has dominated Automatic Speech Recognition (ASR) research over the last few decades leading to a number of successes. The problem of speech recognition is defined as the conversion of spoken utterances into textual sentences by a machine.  In the statistical framework, the Bayesian decision rule is employed to find the most probable word sequence, \( \hat H \) , given the observation sequence \( O = (o_1, . . . , o_T ) \) :

The marginal probability, \( P(O) \) , is discarded in the second equation since it is constant with respect to the ranking of hypotheses, and hence does not alter the search for the best hypothesis.  \( P(O|H) \) is calculated by the acoustic model and  \( P(H) \) is modeled by the language model.

Architecture of an ASR system

Speech recognition systems can be classified on the basis of the constraints under which they are developed and which they consequently impose on their users. These constraints include: speaker dependence, type of utterance, size of the vocabulary, linguistic constraints, type of speech and environment of use. We will describe each constraint as follows:

Vocabulary Size: The number of words in the vocabulary is a constraint that makes a speech recognition system small, medium or large. As a rule of thumb, small vocabulary systems are those which have a vocabulary size in the range of 1-99 words; medium, 100-999 words; and large, 1000 words or more. Large vocabulary speech recognition systems perform much worse compared to small vocabulary systems due to different factors such as word confusion that increases with the number of words in the vocabulary. For small vocabulary recognizer, each word can be modeled. However, it is not possible to train acoustic models for thousands of words separately because we cannot have enough training speech and storage for parameters of the speech that is needed. The development of large vocabulary recognizer, therefore, requires the use of sub-word units. On the other hand, the use of sub-word units results in performance degradation since they cannot capture co-articulatory effects as words do. The search process in large vocabulary recognizer also uses pruning instead of performing a complete search.

Environment: Speech recognizer may require the speech to be clean from environmental noises, acoustic distortions, microphones and transmission channel distortions or they may ideally handle any of these problems. While current speech recognizer give acceptable performance in carefully controlled environments, their performance degrades rapidly when they are applied in noisy environments. This noise can take the form of speech from other speakers; equipment sounds, air conditioners or others. The noise might also be created by the speaker himself in a form of lip smacks, coughs or sneezes.

LVCSR can be divided into two categories: HMM-based model and the end-to-end model.

The HMM-based model has been the main LVCSR model for many years with the best recognition accuracy. An HMM-based model is divided into three parts:acoustic, pronunciation and language model. In HMM based model, each model is independent of each other and plays a different role. While the acoustic model models the mapping between speech input and feature sequence, the pronunciation model maps between phonemes (or sub-phonemes) to graphemes, and the language model maps the character sequence to fluent final transcription.

Acoustic Model:  In the acoustic model, the observation probability  is generally represented by GMM. The posterior probability distribution of hidden state can be calculated by DNN method. These two different calculations result into two different models, namely HMM-GMM and HMM-DNN. HMM-GMM model was a general structure for many speech recognition systems. However, with the development of deep learning technology, DNN is introduced into speech recognition for acoustic modeling. DNN has been used to calculate the posterior probability of the HMM state replacing the conventional GMM observation probability. Thus, HMM-GMM model is replaced by HMM-DNN since HMM-GMM provides better results compared to HMM-GMM and becomes state-of-the-art ASR model. In the HMM-based model, different modules use different technologies and have different roles. While the HMM is mainly used to do dynamic time warping at the frame level, GMM and DNN are used to calculate emission probability of HMM hidden states.

Pronunciation Model: Its main objective is achieve the connection between acoustic sequence and language sequence. The dictionary includes various levels of mapping, such as pronunciation to phone, phone to trip-hone. The dictionary is used to achieve structural mapping and map the probability calculation relationship.

Language Model: It contains rudimentary syntactic information. Its aim is to predict the likelihood of specific words occurring one after another in a given language. Typical recognizers use n-gram language models. An n-gram contains the prior probability of the occurrence of a word (unigram), or of a sequence of words (bigram, trigram etc.):

Because of the  above-mentioned shortcomings of the HMM-based model and coupled with the promotion of deep learning technology, more and more works began to study end-to-end LVCSR. The end-to-end model is a system that directly maps input audio sequence to sequence of words or other graphemes. 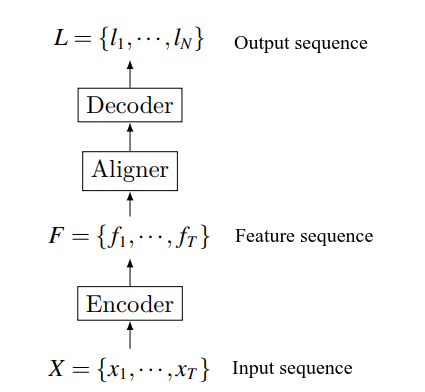 Most end-to-end speech recognition models include the following parts: the encoder maps speech input sequence to feature sequence; the aligner realizes the alignment between feature sequence and language; the decoder decodes the final identification result. Note that this division does not always exist since end-to-end itself is a complete structure. Contrary to the HMM-based model that  consists of multiple modules, the end-to-end model replaces multiple modules with a deep network, realizing the direct mapping of acoustic signals into label sequences without carefully-designed intermediate states. In addition to this, there is no need to perform posterior processing on the output.

Compared to HMM-based model, the main characteristics of end-to-end LVCSR are:

These features of of end-to-end LVCSR model enables to greatly simplify the construction and training of speech recognition models.

The end-to-end model are mainly divided into three different categories depending on their implementations of soft alignment:

Although HMM-DNN provides still state-of-the-art results, the role played by DNN is limited. It is mainly used to model the posterior state probability of HMM’s hidden state. The time-domain feature is still modeled by HMM. When attempting to model time-domain features using RNN or CNN instead of HMM, it faces a data alignment problem: both RNN and CNN’s loss functions are defined at each point in the sequence, so in order to be able to perform training, it is necessary to know the alignment relation between RNN output sequence and target sequence.

CTC makes it possible to make fuller use of DNN in speech recognition and build end-to-end models, which is a breakthrough in the development of end-to-end method. Essentially, CTC is a loss function, but it solves hard alignment problem while calculating the loss. CTC mainly overcomes the following two difficulties for end-to-end LVCSR models:

CTC has two main deficiencies in CTC which hinder its effectiveness:

For speech recognition, the first point has huge impact. RNN-transducer was proposed to solve the above-mentioned shortcomings of CTC. Theoretically, it can map an input to any finite, discrete output sequence. Interdependencies between input and output and within output elements are also jointly modeled.

The RNN-transducer has many similarities with CT: their main goals is to solve the forced segmentation alignment problem in speech recognition; they both introduce a “blank” label; they both calculate the probability of all possible paths and aggregate them to get the label sequence. However, their path generation processes and the path probability calculation methods are completely different. This gives rise to the advantages of RNN-transducer over CTC.

8.3.5. Types of errors made by speech recognizers#

Though ASR research has come a long way, today’s systems are far from being perfect. Speech recognizer are brittle and make errors due to various causes. Most errors made by ASR systems fall into one of the following categories:

Recent advances in ASR has brought automatic speech recognition accuracy close to human performance in many practical tasks. However, there are still challenges:

The performance of an ASR system is measured by comparing the hypothesized transcriptions and reference transcriptions. Word error rate (WER) is the most widely used metric. The two word sequences are first aligned using a dynamic programming-based string alignment algorithm. After the alignment, the number of deletions (D), substitutions (S), and insertions (I) are determined. The deletions, substitutions and insertions are all considered as errors, and the WER is calculated by the rate of the number of errors to the number of words (N) in the reference.

Sentence Error Rate (SER) is also sometime used to evaluate the performance of ASR systems. SER computes the percentage of sentences with at least one error.