Look at the speech signal segment below. On a large scale it is hard to discern a structure, but on a small scale, the signal seems continuous. Speech signals typically have such structure that samples near in time to each other are similar in amplitude. Such structure is often called short-term temporal structure.

More specifically, samples of the signal are correlated with the preceding and following samples. Such structures are in statistics measured by covariance and correlation, defined for zero-mean variables x and y as 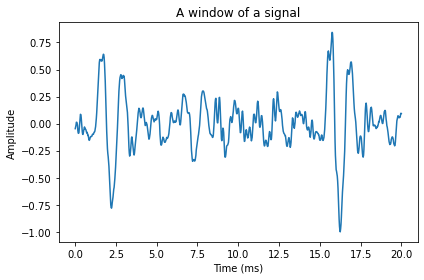 Because we assume that the signal is stationary, and as a consequence of the above formulations, we can readily see that autocovarinaces and -correlations are symmetric

This symmetry is clearly visible in the figure below, where the curve is mirrored around lag 0. 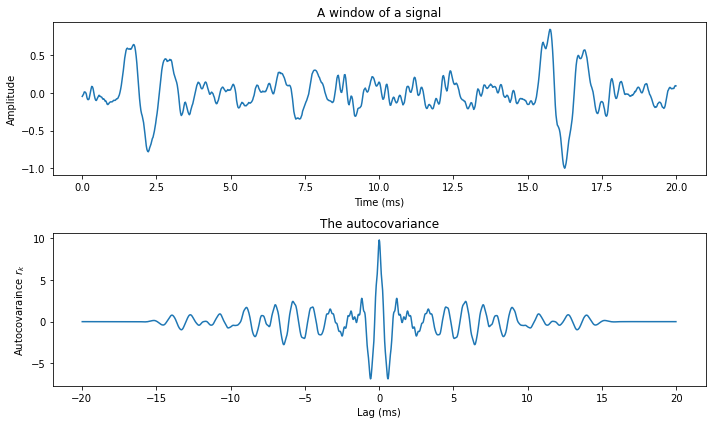 The above formulas use the expectation operator \(E[\cdot ]\) to define the autocovariance and -correlation. It is an abstract tool, which needs to be replaced by a proper estimator for practical implementations. Specifically, to estimate the autocovariance from a segment of length \(N\), we use

Observe that the speech signal \(x_{n}\) has to be windowed before using the above formula.

We can also make an on-line estimate (a.k.a. leaky integrator) of the autocovariance for sample position \(n\) with lag \(k\) as

where \(\alpha\in[0,1]\) is a small positive constant which determines how rapidly the estimate converges.

It is often easier to work with vector notation instead of scalars, whereby we need the corresponding definitions for autocovariances. Suppose

We can then define the autocovariance matrix as