In speech processing and elsewhere, a frequently appearing task is to make a prediction of an unknown vector y from available observation vectors x. Specifically, we want to have an estimate \( \hat y = f(x) \) such that \( \hat y \approx y. \) In particular, we will focus on linear estimates where \( \hat y=f(x):=A^T x, \) and where A is a matrix of parameters. The figure on the right illustrates a linear model, where the input sample pairs (x,y) are modelled by a linear model \( \hat y \approx ax. \) 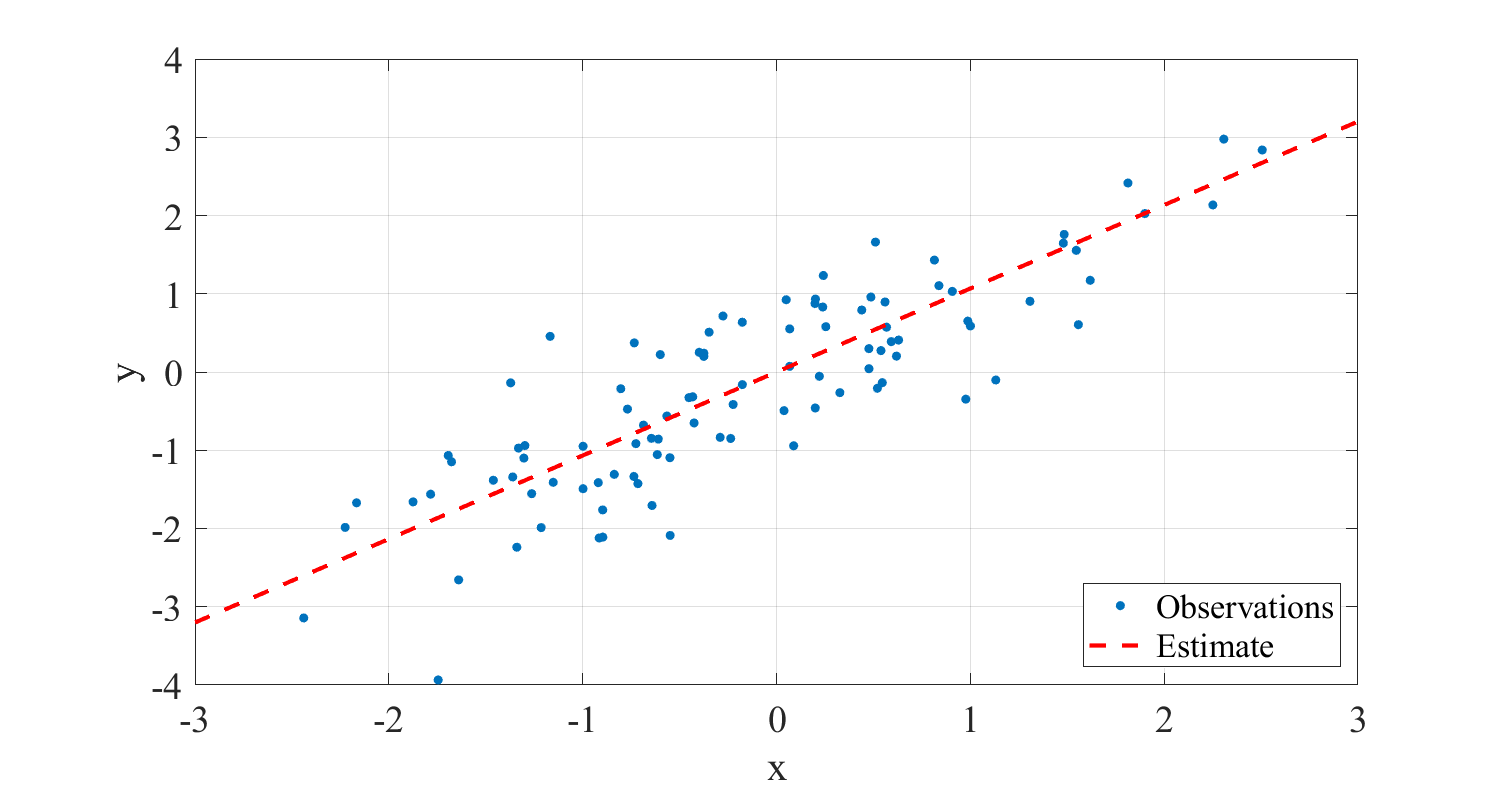 This can in generally not be directly implemented because we have the abstract expectation-operation in the middle.

(Advanced derivation begins) To get a computational model, first note that the error expectation can be written in terms of the mean of a sample of vector e_{k} as

where \( E=\left[e_1,\,e_2,\dotsc,e_N\right] \) and tr() is the matrix trace. To minimize the error energy expectation, we can then set its derivative to zero

where the superscript \( \dagger \) denotes the Moore-Penrose pseudo-inverse. 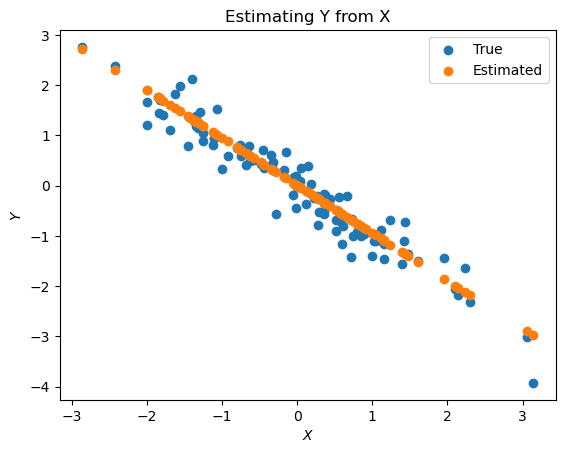 Suppose that instead of an estimate \( \hat y=A^T x \) , we want to include a mean vector in the estimate as \( \hat y=A^T x + \mu \) . While it is possible to derive all of the above equations for this modified model, it is easier to rewrite the model into a similar form as above with

That is, we can extend x by a single 1, (the observation X similarly with a row of constant 1s), and extend A to include the mean vector. With this modifications, the above Moore-Penrose pseudo-inverse can again be used to solve the modified model.

For simplicity, let us consider only scalar estimation, where instead of vector y, as well as matrices A, B and C, respectively, we have scalar θ as well as vector a, b and *c *and the optimization problem is

A heuristic explanation of this objective function is based on the fact the g is a free parameter. Since its value can be anything, then \( c^T a - b \) must be zero, because otherwise the output value of the objective function could be anything. That is, when optimizing with respect to a, we find the minimum of the mean square error, while simultaneously satisfying the constraint.

The objective function can further be rewritten as

In the case that we have multiple constraints over multiple dimensions, we can keep merging them one by one until we have an entire unconstrained programming problem.

Linear regression is just about the simplest effective method, which you can do to model data. If that works then it’s perfect! Especially for estimating low-dimensional from high-dimensional data, linear estimates can be very useful. In any case, it is always a good approach to start modelling with the simplest possible model, which usually is a linear model. If nothing else, that gives a good baseline. The first figure on this page demonstrates a case where a linear model does do a decent job at modelling the data.

Naturally there are plenty of situations where linear models are insufficient, such as when the data

Moreover, in many cases we are not interested in modelling the average signal, but to recreate a signal which contains all the complexity of the original signal. Say, if we want to synthesize speech, then “average speech” can sound dull. Instead, we would like to reproduce all the colorfulness and expressiveness of a natural speaker. A model of the statistical distribution of the signal can then be more appropriate, such as the Gaussian mixture model (GMM).

Another related class of models are Sub-space models, where the input signal is modeled in a lower-dimensional space such that dimensions related to background noise are cancelled and the desired speech signal is retained.